You are here: Home / Club Corner / It’s As Much About Attitude As Ownership – Anyone Who Owns A MINI Understands

A recent story by Steven Reive, feature writer with Wheelbase Media caught my eye.  Why you say, one guess; it was about MINIs or more precisely about Jim McDowell, Vice-President of MINI.  The following is an excerpt from the full article.

“He’s proof that automobile big business doesn’t have to be all business all the time.  That fun is actually part of business and, in fact, having fun means a better business.  Who is the guy who believes that a day hasn’t been a good day if you “haven’t laughed at the bottom of your lungs at least five times.”  Or try the guy who believes a recent romance film about two people intensely in love is “an inspiration, unlike any movie I have ever seen.”  Or how about the guy who enjoys reading books about the construction of New York’s Penn Station subway, loves developing talented young workers and demands that people be polite?

Meet Jim McDowell, Vice-President of MINI, BMW’s little brand that just can’t stop selling lots of cars.  McDowell puts the “e” in eclectic and the “e” in electric.  And isn’t it perfect that a guy such as McDowell is directing the future of the brand that epitomizes the word fun in the auto business?  Never have two groups been so 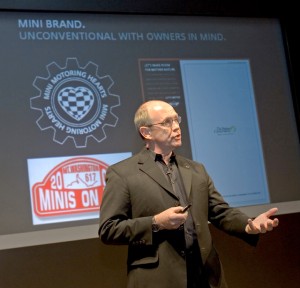 perfectly aligned.  Jim McDowell is the lightning rod for a hot product.  Sales are sizzling, new products are on the way and McDowell is steering the ship.

Not bad for a guy in his late 50’s who has an advanced degree from Harvard University, wears Hawaiian shirts to the office and cherishes his big break in a business he never dreamed he would be part of when he joined Porsche in 1985.  “I had been working as a corporate planner but never alongside the CEO in such a fun industry.” McDowell told Automotive News.  “It hooked me on great German cars and also showed me how fun the industry could be.”  Eight years and many interesting lessons later, McDowell helped turn BMW into a must-have on North American shores as the self-proclaimed “ultimate driving machine.”  He was named a “Marketer of the Year” in the United States.

BMW sales rose and McDowell rose with it.  So it was no surprise when the funny, articulate and relaxed executive was pegged to lead Mini, acquired by BMW, through its next stages of development.  The new MINI was known for doing the outrageous.  In one advertisement a few years ago, the brand gave away a box of Krispy Cream donuts and called them “cop 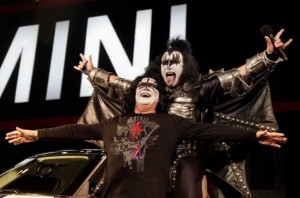 Ask any owner and they will tell you the MINI experience is much more than the car itself: it’s a culture you become swept up in, it’s an attitude.  The icon was established and it was McDowell’s job to push it right to the edge by pushing buyer’s hot buttons.

He still loves Mexican food, works out every day at 5:30 a.m. and insists on driving a MINI Cooper convertible instead of a big BMW 7 Series.  Looking for the reason why the MINI brand will continue to soar in the future?  Look at the guy with the infectious laugh, the wealth of knowledge and the desire to be continually better.”

For the full article see: http://autos.winnipegfreepress.com/news-article/id-154/

Are you passionate about your MINI?  Just can't get enough of it and hate to leave it in the garage … END_OF_DOCUMENT_TOKEN_TO_BE_REPLACED