The date has been set in stone for the annual MidCal MINIs Morro Bay / Paso Robles / Winery Run. As in years past, the group of MINIs will head over to the coast by taking Highway 41 to the twisties on Highway 46 with a stop at Rotta Winery for some wine tasting. The date has been set for September 14th with the band of merry MINIs departing the Starbucks at 41 and Shaw at 8:00 a.m. The group will begin assembling at about 7:45 a.m. to coordinate and set walkie talkies on the same frequency. (These are important when traveling in a large group as it helps to keep us together, so don’t forget yours!)

The MINIs will arrive at the Winery at approximately 11:00 a.m.  Upon arrival there is a $5.00 wine tasting fee which will be credited toward any purchase you make in the winery store.  This year lunch will be a BYOL (Bring Your Own Lunch).  RSVPs will be needed no later than September 9th.

Rotta Winery, in Templeton California is located west of Hwy 101, just south of Hwy 46, at 250 Winery Road. The group spends several hours at the winery and then it is

every MINI for itself. Several of the MINIs in the past have headed over to Cambria, Morro Bay, Hearst Castle and other nearby locations for the night and to take in some local sites and events, while others have headed back home.

Rotta Winery, founded in 1908 by the Rotta Family, is the only remaining family owned “original” winery in San Luis Obispo County. Mike Giubbini, grandson to the Rotta Family and Mark Caporale of Napa, combined their talents to “bring back to life” the historic and rustic winery. Today, Rotta Winery, just as in days of old, specializes in premium red and white wines along with flavorful and distinct dessert wines. The 20-acre Rotta estate vineyard has 15 acres in Zinfandel and five in Cabernet Sauvignon. For now the Rotta label is focusing on red wines such as Cabernet Sauvignon, Zinfandel, Merlot, and Black Monukka– a dessert wine and Zinfandel Port. All of the fruit for the label is being sourced from local vineyards, especially those from the Westside.

For those traveling to the coastal area for the first time, below is just a bit of history related to the area. 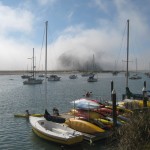 rite of the MINI group, generally provides the much needed cooler weather for those from Fresno who have endured enough  days of temps over 100 degrees. Now predominately a tourist town, Morro Bay was founded by Franklin Riley in 1870 as a port for the export of dairy and ranch products. He was instrumental in the building of a wharf which has now become the Embarcadero. During the 1870s, schooners could often be seen at the Embarcadero picking up wool, potatoes, barley, and dairy products. Since the beginning of the 20th century, the town has been a center for beach holidays. Tourism is the city’s largest industry. The most popular beach is on the north side of Morro Rock, north of the harbor. There are also excellent beaches north and south of the town which are now owned by the State of California. 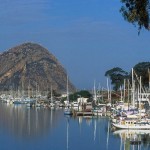 In the 1940s, Morro Bay developed an abalone fishing industry. Having peaked in 1957, stocks of abalone have now declined significantly due to overfishing, it remains a fishing port for halibut, sole, rockfish, albacore, and many other species for both commercial and sport vessels. The town now combines the fishing industry with coastal tourism. In addition, oysters are farmed artificially in the shallow back bay.

Another coastal area popular with folks living inland is Cambria. Early settlers were drawn to the area by its fertile lands, streams, and lumber. Additionally, miners were attracted to the area by the 1862 discovery of cinnabar, the mineral in which quicksilver is found. For awhile, Cambria was a boomtown, with $280,000 worth of quicksilver shipped out of San Simeon between 1867-70.

ment called Slab Town, it was centered at Leffingwell cove of today’s north Moonstone Beach, which also housed a wharf. As lumber, ranching and Quicksilver (mercury) mining increased in the area, the village adopted the more dignified name of Cambria, influence by a local transplant surveyor from Cambria County, Pennsylvania.

Other notable locations in the town include the historical Old Santa Rosa Chapel which was built in 1870, and as one of the oldest churches in the county of San Luis Obispo, held Catholic mass until May 26, 1963. The church fell into neglect until 1978, when the chapel and cemetery were restored.

The primary economic activity of Cambria is tourism. Located on the Pacific Ocean the area has rocky cliffs and beaches. There are many hotels 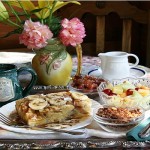 A favorite spot for visitors to Cambria is the J. Patrick House. J. Patrick House Bed & Breakfast Inn is an authentic Early American-style log home decorated in country decor and features a garden tucked in the forest, and a charming carriage house with eight guest rooms with fireplaces and private baths offered. A full breakfast and evening wine and hors d’ouvres are included, and if you are lucky enough, you might even have the Stuffed French toast with Pure Maple syrup!

So if you are looking for cooler weather, an easy drive with twisties thrown in and perhaps a night out of town, this is your run.

Are you passionate about your MINI?  Just can't get enough of it and hate to leave it in the garage … END_OF_DOCUMENT_TOKEN_TO_BE_REPLACED