It is time once again to put some spit and polish on your MINI and join in on an annual MidCal tradition, participation in the annual Clovis British Car Round Up.  Sponsored by the Valley British Auto Club, this group celebrates the British car hobby in the Central San Joaquin Valley. This is the only official car show entered into by the MidCal group and the Car Roundup is held once a year on the last weekend in September. Celebrating its 11th Anniversary, this event continues its tradition of offering car enthusiasts the opportunity to see up close and personal, British cars from around the state. Cars built in England like Triumph, MG, Jaguar, Healey, Range Rover, Austin, Morris, Sunbeam, Riley, Lotus and of course MINI/Mini Coopers all out for a day of friendly competition. The car show held in conjunction with the annual Clovis 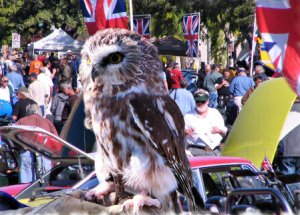 Antique and Collectibles Fair provides attendees with plenty to see and do and is enhanced by the number of restaurants, coffee houses, live music and exceptional antiques and collectibles all within walking distance of the car show.

Like last year, MidCal encourages participation in the Foothill Run on Saturday September 28th in addition to the Car Show on September 29th. The entry fee into in the British Car Roundup is not only a ticket to a great weekend of British Car fun but is also used to help support the construction of the ‘Nature Education and Wildlife Rehabilitation Center near Clovis, CA. The Nature Center will provide residents and students from all over the Valley with a unique nature experience within a suburban setting. We live in an area rich in natural beauty but the travel distance to participate in or observe nature excludes many from these experiences. When this project reaches full development, individuals and families may observe the beauties of this region in a natural state without lengthy travel and large expense. 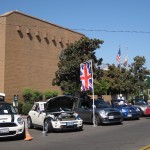 The two-day event starts on Saturday September 28th at 9:00 am in front of the Clovis Cole Hotel for a group tour and Run through the Sierra Foothills. At noon a catered lunch is served with a short program about the Nature Center. One hundred percent of the luncheon event proceeds benefits the Clovis Valley Nature and Education Center. At 7:00 pm there is a “meet up” no-host dinner at Yosemite Falls Cafe in Clovis for old and new friends to enjoy time together.

Sunday, September 29th,  the Car Show kicks off from 9 am to 10 am for registration.  The arrival location is new this year and is at Bullard and Woodworth so be sure to click on the registration link below for an entry form and check-in map.  Drivers are instructed to park their cars in assigned areas by marquis and model. From 10 am to 2 pm, British car viewing and treasure hunting at the Clovis Antique and Collectables Faire is held.

however have several event winner’s last year, one was even a repeat winner.  A third place Oil Spot winner in 2011, Reggie, a 1995 Classic Mini took first place in 2012 for best display of oil drips. Ordinarily this would not be a good thing. Reggie however had a temperamental oil filter and even though his gasket had been changed and tightened several times, he appeared to have saved up so as to make a “big splash” for this event.  Looks like he could use some depends too!  This year however, Reggie is out of the running as he has mastered holding his oil! 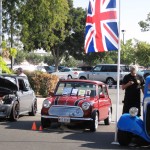 of 2011, Reggie went from a seldom driven little hobby car sold on eBay to a very much-loved member of a MINI family. He made his brother and sister, Coopster and MINImowse very proud indeed. Thanks of course went to the MidCal cheering section that ensured Reggie’s Oil Drip victory. First place by the way garnered two gallons of engine oil; obviously something that Reggie accepted proudly and most definitely used! An added and unexpected treat was Reggie taking Second Place in the Winner’s Circle in 2012. Not too bad for a little British car who spent his formative years in Japan and his first few years in the USA seeking a true Mini lover.

Jon Brother’s and his Classic Mini, also members of MidCal, took First in Class. Jon and his Mini were fairly newly acquainted in 2012. After a lengthy search and “an endless obsession” according to Jon, to read everything there was to find out about the Classic Minis, Jon found a Mini to make his own. It is a very brilliantly done Cooper S replica

. His car was fully restored, and Vintage Race prepared, by a known racer in Northern California in 1995/1996. The car had approximately 3,500 miles on it since it’s rebuild. It has a CSRG log book, with the last entry having been made in 2001. Races were logged at Thunderhill, Sears Point and Laguna Seca.

You don’t want to miss this fun event, so click here to find the registration form and more information. All registrations are due no later than September 26th but to be safe, get them in by September 20th.

Let’s have another great turnout this year MidCal and let’s kick some boot! See you there.

Are you passionate about your MINI?  Just can't get enough of it and hate to leave it in the garage … END_OF_DOCUMENT_TOKEN_TO_BE_REPLACED