You are here: Home / Club Events / Announcements at the MidCal Meeting on August 23rd.

Announcements at the MidCal Meeting on August 23rd.

Friday night at Mother Mary’s was a reunion of sorts with numerous MidCal MINI members getting re-acquainted with other Club members separated this year by a host of summer activities that kept us all occupied with non-MINI activities.  The MINI event also welcomed several new MINI owners eager to share their passion with other MINI lovers.  Club President Tina Kell announced that several club members will be assisting her with organizing events aid in planning and coordination responsibilities.  Tina’s time is appropriately being fully absorbed by her daughter and our youngest club member Zoie these days.  Jon Brothers, Steve Phillips and Robert Fisher will be assisting in planning runs, coordinating dates and reaching out to other Club members for ideas and suggestions for MidCal events.  We want to hear what Club members are interested in, but  more importantly, this is your Club and members are encouraged to take part in assisting with Club events as well.  The group is looking to organize various types of events which appeal to those who love to drive the curves, those who don’t, those looking for car care information and anything else the members would like to see on the Club roster of events.  Tina reviewed upcoming events for the balance of 2013 and shared a preview of preliminary items calendared for 2014.  She also handed out a suggestion form and asked attendees to share ideas, thoughts and suggestions for what the group would like to see in 2014.

Something new in 2014 will be the “cross-pollination” of the MidCal group with the Valley British Auto Club and the invitation for the two groups to share information on runs and events that each club organizes.  O

ne such combined event that has been a favorite of the MidCal group has been the tradition of participating in the annual Clovis British Car Round Up celebrating the British car hobby in the Central San Joaquin Valley. The Car Roundup is held once a year on the last weekend in September and is sponsored by the Valley British Auto Club. This year the Roundup celebrates its 11th Anniversary and continues its tradition of offering car enthusiasts the opportunity to see up close, British cars from around the state. Cars built-in England like Triumph, MG, Jaguar, Healey, Range Rover, Austin, Morris, Sunbeam, Riley, Lotus and MINI/Mini Cooper all out for a day of friendly competition. The car show held in conjunction with the annual Clovis Antique and Collectibles Fair provides attendees with plenty to see and do and is enhanced by the number of restaurants, coffee houses, live music and exceptional antiques and collectibles all within walking distance of the car show.  This year the event will be on September 28th and 29th.  More information can be found at http://www.valleybritish.org/.

The MidCal  group was also asked whether or not there is interest in holding the Annual Whoa Nellie Deli Run since participation has dwindled over the last several years.  This is a long run but if have never been, it is worth going at least once.  Saturday, October 12th has been tentatively selected as the date for the annual Tioga Pass Run to the World Famous Whoa Nellie Deli.  In the past the Fresno contingent meets at Starbuck’s at Shaw just east of 41 at 7 am. At 7:30 am sharp,  the group leaves to caravan to the second meeting location in Oakhurst and then rendezvous at about 8:00 – 8:15. The Oakhurst meeting location is the Raley’s Parking lot on the corner of HWY 41 & HWY 49. After a brief pit stop, the expanding caravan heads back onto 41 and takes the scenic drive through the edge of

Yosemite National Park. Upon entering the park and paying the $20 entry fee it is then on to Tuolumne Meadows and over Tioga Pass into the town of Lee Vining and the Famous “Whoa Nellie Deli”!

The Whoa Nellie Deli is located in a Mobil gas station on a hilltop just west of the intersection of U.S. Route 395 and California State Route 120, one mile south of the business district of the small town of Lee Vining, California. (22 Vista Point Road, Lee Vining CA.)  Geographically, this location is where the eastern edge of the Sierra Nevada meets the western edge of the Great Basin. Mount Dana and other High Sierra peaks are visible to the west. The eastern entrance of Yosemite National Park, located at Tioga Pass, is 12 miles to the west. Mono Lake, a uniquely salty and mineral saturated body of water, is visible from the restaurant to the northeast. The gas station also offers a gift shop, a small grocery store, and picnic facilities. Live musical performances are featured about 30 times each year from late spring to early autumn, usually on Thursday and Sunday evenings. The restaurant is closed in the winter.

Also discussed was either an alternative run to the Whoa Nellie Deli or an additional run on October 19th.  This run would be in the Bass Lake Powerhouse area , so what this site for more information. 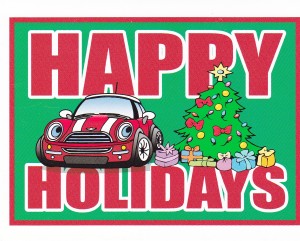 And of course the Annual MidCal  MINIs Christmas Party was announced for December 14th.  Tom and Tina (MINIEOR) are hosting another Annual MidCal MINI Potluck Christmas Party.   The party will again have an early start to extend the time to enjoy the beautiful California foothill scenery, wonderful weather and to enhance  quality chat time with your MINI family. All are welcomed to stay as long as you want and those partaking of the Holiday libations (drinking) and those not wanting to drive home, are encouraged to bring a sleeping bag and to stay the night. There are two bedrooms available, one with a futon and one with an air bed (with first come – first serve, so early sign up will be encouraged) and of course the living room floor is once again open for business.  The party venue also has room for someone to bring a trailer or motor home however there are no hookups.

As per tradition for those wishing to participate, there is the ever popular gift exchange. The ONLY RULES: Don’t spend more than $20 to $25 and preferably something with a MINI theme (for a MINI or having to do with a MINI or even for the MINI owner).

Watch this website for more information on each of the above referenced events with even more to come.  A calendar of currently proposed events for 2014 will be posted in the next few days.

Are you passionate about your MINI?  Just can't get enough of it and hate to leave it in the garage … END_OF_DOCUMENT_TOKEN_TO_BE_REPLACED