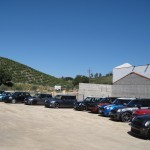 It is time for the MidCal MINIs to plan one of its favorite runs; the Morro Bay / Paso Robles Run. Like last year, the group of MINIs would head over to the coast, most likely by taking Highway 41 to the twisties on Highway 46.  If possible, the band of MINIs would like to stop for lunch at Rotta Winery.  This run is in the discussion stages so be sure to attend the MidCal meeting on August 9th or 23rd (date yet to be set) to put in your two cents worth.

Rotta Winery, in Templeton California is located west of Hwy 101, just south of Hwy 46, at 250 Winery Road.  Last year’s run included a Winery Tour, wine tasting and a catered box lunch for all participants. Upon arriving at the winery the MINIs were greeted by host and winery owner Mike Guibbini who led a tour of the operations. After a great afternoon, several of the MINIs headed over to Cambria, Morro Bay and other nearby locations for the night and to take in some local sites and events.

unded in 1908 by the Rotta Family, is the only remaining family owned “original” winery in San Luis Obispo County. Mike Giubbini, grandson to the Rotta Family and Mark Caporale of Napa, combined their talents to “bring back to life” the historic and rustic winery. Today, Rotta Winery, just as in days of old, specializes in premium red and white wines along with flavorful and distinct dessert wines. The 20-acre Rotta estate vineyard has 15 acres in Zinfandel and five in Cabernet Sauvignon. For now the Rotta label is focusing on red wines such as Cabernet Sauvignon, Zinfandel, Merlot, and Black Monukka– a dessert wine and Zinfandel Port. All of the fruit for the label is being sourced from local vineyards, especially those from the Westside.

Are you passionate about your MINI?  Just can't get enough of it and hate to leave it in the garage … END_OF_DOCUMENT_TOKEN_TO_BE_REPLACED