You are here: Home / MINIisms / Dogs Love MINIs too!

The Society for the Prevention of Cruelty to Animals(SPCA) has teamed up with MINI Cooper in New Zealand to teach three dogs how to drive. The Auckland SPCA hopes to dispel idea that abandoned pets are second-rate

with the social campaign. “Obviously, we think dogs are pretty smart and amazing. And we reckon, if more people thought the same, more of our dogs would find happy homes,” the official Facebook page states. The interactive marketing campaign lives on the Driving Dogs Facebook page where visitors can learn about adopting a smart dog and about the MINI Cooper.

The chosen pooches — Porter, Monty and Ginny — are learning to drive in rigs with paw-activated accelerators and brakes. Trainers chose the canine trio based on their size, look and attitude from dozens of dogs at the shelter. After just a few weeks of training with head driving coach Mark Vette and his team of experts, the playful pups learned to sit facing forward with their paws on the steering wheels.

The rescue dogs will be put to the test in front of Campbell Live’s national TV audience — under the supervision of trainers, of course. To find out if these talented pups learn how to drive, tune in on Dec. 10. In case you were wondering all three of the canine drivers are still up for adoption.

They’re really putting the fur in chauffeur. For the past two months, animal trainer Mark Vette has been teaching dogs to drive, New Zealan

d TV station Campbell Live reported. The lessons are part of a campaign by the New Zealand Society for the Prevention of Cruelty to Animals (SPCA), meant to clear up “common misconceptions” about rescue dogs. “Sometimes people think because they’re getting an animal that’s been abandoned, that somehow it’s a second-class animal,” SPCA Auckland CEO Christine Kalin told the New Zealand Herald. “Driving a car actively demonstrates to potential rescue dog adopters that you can teach an old dog new tricks.” Kalin added that the canines’ achievements behind the wheel shows “just how much potential all dogs from the SPCA have as family pets.”

All the new drivers are shelter dogs: Monty, an 18-month Giant Schnauzer, was given to the SPCA when he became too much for his owner to handle. Ginny, a 1-year-old whippets cross, was rescued from an abusive home. Porter, a 10-month old Beardie cross, was abandoned on the streets. The dogs trained for several weeks before hopping into a real car, modified to accommodate the unique needs of a canine driver. So far, the animals have driven only with some human guidance, in the form of verbal commands and the occasional steering wheel readjustment. 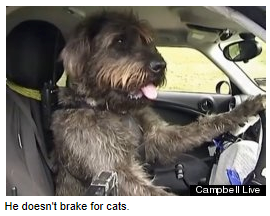 ot to say the other two dogs haven’t made great strides in their driving as well. “The way all three SPCA rescue dogs have taken to training really does prove that intelligent creatures adapt to the situation they’re in,” Vette told the paper. “It really is remarkable.”

Probably best to keep off the roads on that day.

Since Campbell Live showed them driving cars on Monday night’s programme, the dogs have featured on the David Letterman Show, the BBC, the New York Times and the Huffington Post. The video reached number one on the BBC’s most watched video and most shared video lists. Tonight the famous trio joined John Campbell and Tristram Clayton in the studio, with one dog seeming to take a particular liking to John.

Are you passionate about your MINI?  Just can't get enough of it and hate to leave it in the garage … END_OF_DOCUMENT_TOKEN_TO_BE_REPLACED