Club Run for 2013 has hit a target and has been scheduled for April 13th and is one of the Club’s favorites, an annual run to Jamestown, CA.  This historic gold mining town dates back to the 1840’s.  A walk down Main Street in Historic Jamestown is a step back in time.  A few blocks east of the historic downtown area is the State park Railtown.

This park has preserved much of the Sierra Railway, built in 1897 to link the very isolated areas, at that time, to Oakdale and the rest of the rail network. The line carried lumber from sawmills in Tuolumne City and Standard to the outside world. It also carried quartz ore to processing plants in the Bay Area where the gold was then extracted.

You can see today evidence of the rich history of Jamestown, in the architecture of the buildings and homes along Main Street, at Railtown 1897, the state park that has preserved the turn-into-the-20th century beginnings of the steam Sierra Railway, and at Woods Crossing, the gold discovery site just west of town. 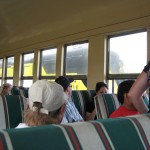 This was in the early summer of 1848, a few months after the famous gold discovery at Sutter’s Mill that started the Gold Rush, about a hundred miles north of here at Coloma. Miners quickly came to the area, and for years afterwards, Woods Creek was filled with miners washing dirt that they dug out of the creek, seeking flakes or nuggets.  Many made significant finds in that first year. The gold at Sutter’s Mill was discovered in January of 1848 and Sutter initially tried to keep it secret. This failed, and a large proportion of the settlers then in California traveled to the Gold Country to mine. However, that year–when the gold was easiest to find–mostly involved those already in the West. Although accounts of the gold discovery were published in Eastern newspapers, they were not widely believed, and it took time to get to California from the east. Finally, in December of 1848, President McKinley made a speech to Congress about the gold discovery, having received rich samples. In 1849, the mass migration of miners from the east began, by wagon, by ship around Cape Horn or in the two-stage ship journey via the jungles of Panama. 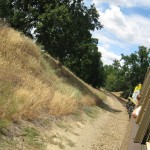 Jamestown, like many other such towns, went through a succession of booms and busts. Many towns in the area simply disappeared after the easy pickings of the Gold Rush ended. Jamestown survived, going through two major boom periods, although both eventually fizzeled out, and it never grew as large as its bigger sister, Sonora, which became a business and government center and also sustained itself after the placer mining ran out by rich underground “pocket mines” beneath the city.

Jamestown was named for a man named Col. George F. James, a flamboyant attorney who came here from San Francisco with an entourage. He set up shop in a tent near Woods Creek and sold groceries, mining equipment. He became the town’s first alcade, a sort of combination mayor, judge, city clerk, and advisor to all that was part of the Mexican legal system in force at the time. James persuaded the town’s population to invest in various schemes that did not pan out, and disappeared overnight, leaving many unhappy residents.

Go to the Club Events link for more information.

Are you passionate about your MINI?  Just can't get enough of it and hate to leave it in the garage … END_OF_DOCUMENT_TOKEN_TO_BE_REPLACED