Sunday, July 15 – Day 12 of MTTS.  The last Rise & Shine Rally of MINI Takes The States 2012 started out just a bit overcast as Bitzie and I awoke to pack Bridget and say goodbye to the Sunset Strip and our overnight home at the Chamberlain.  After checking out we made our way to the parking garage and looked around for our sweet little silver “foster” Cabr 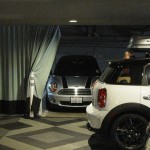 io.  Oddly enough while there were MINIs everywhere we did not see Bridget.  Upon handing our valet tag to the attendant, he proceeded to walk across the interior driveway and pull back some curtains.  I kid you not, Bridget had been tucked in behind curtains for a night of restful undisturbed sleep.  While I know that the purpose of the curtains was to make the valet parking area a lovely extension of the well-appointed lobby, I like to think that it was really VIP parking and Bridget most certainly deserved it!  She was after all originally from Royal Motors in Beverly Hills

We packed our ever-expanding luggage, goodie bags and MINI shopping loot into the boot and headed down Sunset Boulevard to where it meets the (PCH) Pacific Coast Highway and our 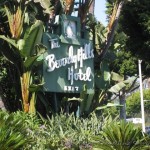 ultimate destination, Gladstones in Pacific Palisades.  Along the way we drove past the very well-known Beverly Hills Hotel sign,  the infamous corner of Bundy Drive and Sunset in Brentwood, one of numerous shield-shaped brown Hollywood signs and of course various other iconic symbols of the area.  The drive was quite enjoyable with lush greenery and nicely landscaped yards but I must say, I was rather surprised to see how bad the pavement was even in Beverly Hills!  Goes to show how broke the State really is.  Bridget was quite adept at the dodge and weave manuever since she was from Beverly Hills after all.  Who knows, it may have been like going home for her. 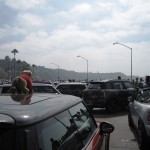 We arrived at Gladstones and was motioned into the very large parking lot.  The first thing we noticed was that the “regular” valet guys were sitting in the key shack and staff dressed in MTTS Event shirts were coordinating parking.  As they waved us into position, we noticed that parking angles were really strange.  The MINI in front of us was in straight alignment but the one in front of that was at a strange curvilinear angle.  I was wondering just how long the MTTS guys had stayed at the Wrap Party the night before?  After parking we noticed that shopping was once again offered and one simply cannot 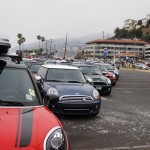 pass up MINI swag.  As we walked towards the MINI tables, people just started shoving stuff at us as they did not want to pack it up and carry it home.  It was fantastic!

As more MINIs and Motorers began arriving we wandered around the parking lot checking out the various cars.  Walking forward from where we had parked, we noticed that only the middle section of the parking seemed to be in disarray.  Upon reaching the top of the parking area we then noticed that the cars had not been parked straight acro

ss in a line, but rather dropped a car as the rows progressed; and then it hit me – it was the MINI wings!  We were being parking in the MINI wing formation.  I could not see the full effect from the ground but just knowing that were we “sending a sign” to those viewing from the hillside across from Gladstones gave me goosebumps.

As we walked back towards Gladstones we saw a really cute sight; all of the little MINIs coming down Sunset Boulevard.  Only MINI owners understand the excitement of seeing a gaggle of MINIs flying together.  Even now it nearly brings a tear to my eye.  And then, we actually saw “THE CAR”.  The little Black MINI driven by The Man

Several months back, I had read an article about him (Jim) and even shared it here on MidCal MINIs.  And there he was, not more than 10 feet away from me.  I remember reading about how much he enjoyed his job and that was no more so evident than when I saw him wheel up in the MINI at Gladstones.  No job is stress free but imagine getting paid to drive a fabulous little car across the country and meeting up with people who share the same excitement, love and devotion for that car.  He is the Piped Piper, the Johnny Apple Seed, the Walt Disney of the car world; the maker of magic. 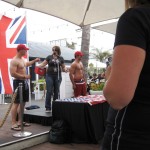 It was then time to head into Gladstones for fresh fruits, breads, muffins, juices, and coffee and to say goodbye to new and old MINI friends.  There were large MTTS badges given away as raffle prizes and the award of the big trip to the London Olympics  and Paralympics, all of which was enhanced with the assistance of the California Beach cuties…. ok just say it, Eye Candy.  And then, there was the water event. 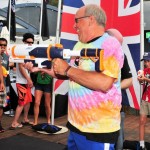 I had read stories about how Jim McDowell loves water guns and very much enjoys catching folks off guard.  I had heard several from the cross-country drive talk about how during the trip Jim would pop out of nowhere and the water would fly.  At one point I was walking around the impromptu stage area at Gladstones and nearly walked into a young man wearing what appeared to be a buffalo hat complete with horns and a very large water blaster!  I immediately knew that Jim was about to get really wet.  I momentarily thought about giving him a heads up but then I thought better and knew that he would enjoy it most of all.  Needless to say he did not stay unarmed for long and revenge was swift. 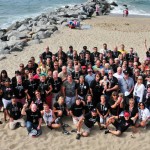 sunny California.  And sunny it was.  The high fog lifted and the sun came out just in time for the grand picture.  I can only imagine that this group of MINI friends will stay in touch for numerous years to come.  They had endured what has to be the hottest summer on record as they motored from coast to coast and yet they prevailed and made it all-the-way.  Not only are they bonded by the love for a very special brand of car, they are connected through shared experiences.  Yep, two years from now, the Sis and I need to make sure that we join in for more of MTTS.  Note to self: To “H” with work, you only live once, it’s MTTS 2014 or bust! 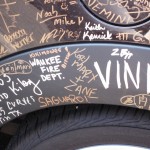 up the beach picture, we wandered back toward the parking lot.  The little black MINI driven by Jim McDowell was parked next to the MINI bus with the gold and silver pens laid out for those who had not already signed the car, to do so.  Not wasting any time, I grabbed one of the gold pens and left our mark, “KIKImowse and Bitzie” right next to the Waukee Fire Department of Iowa, the guys in uniform from Day Seven of the trip.

Upon completion of the beach picture, it was time for all to head to the parking lot where we were told to stand next to our cars.  While Bridget may have been adopted for the weekend, Bitzie and I will always have a soft spot in our hearts for our little silver minx.  We hope that she remembers us as fondly as we do her and truly hope that she enjoyed being able to “ru 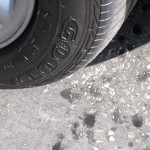 b fenders” with so many other MINIs.  She even got to park next to the red Roadster wrapped with the American Flag.  While we were waiting for the MINI wings overhead photo-op to be set up, I suddenly felt light sprinkles on my left arm.  I looked up but did not see any clouds (no seagulls either thank goodness) and then I felt it again; on my legs this time.  When I turned around, guess who was behind me?  Yep, Jim McDowell with a water gun!  I had just been shot by THE MAN, and it was a privilege.  Even Bridget got her tyre wet!

Well that is the end of our MTTS adventure.  We drove Bridget down the PCH and dropped her off in Newport Beach, just in time to be detailed for her next adventure.  Happy Motoring little Bridget.  Oh and Jim, if you happen to ever see this post, we hope to see you in 2014; it’s at the top of our Bucket List!

Are you passionate about your MINI?  Just can't get enough of it and hate to leave it in the garage … END_OF_DOCUMENT_TOKEN_TO_BE_REPLACED