It is always such a kick to see so many MINIs in one location and for us MTTS 2012 enhanced the excitement further by ending the MTTS tour in Los Angeles.  LA is loaded with MINIs anyway but to see so many at the Rose Bowl was terrific.  Oh and the “Goodie Bags” for 2012 we received when checked in, well my MINI made out like a bandit!  She now has two leather cleaning kits!  Sis’s MINI has cloth seats, so MINImowse is set for life.  Both kids also have new bling in the form of grille badges and pins for their dash covers.  We even bought a third set for Reggie, my Dad’s 1995 Classic Mini.

Bitzie and I both participated in the MINIcross and took the opportunity to test drive the Roadster and the Coupe.

I found the windshield of the Roadster a bit on the low side for my liking.  This is more than likely due to the fact that I am short and have to pull my seat so far forward in any car that I drive.  As a result the visor seemed distracting for me.  I also like my seat jacked up as tall as it can go.  Someone taller that 5’4″ should not have any issues howe 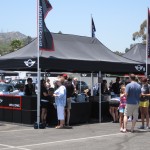 ver as they would have their seat lower and slid further back.  (I remember years ago I wanted to test drive  some little sports car and unless it came with blocks for the pedals and a booster seat, even with the seat as far forward as it could go, there was no way that car was going to work for me!)  The Roadster handled very well and the interior was well-appointed and very comfortable.  I just don’t think “my” model size was a good fit for the Roadster and I doubt that I will be have a growth spurt anytime soon.

I also drove the Coupe which handled equally well, but to me it seem light and 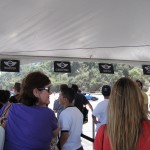 not as heavy as I like.  Now that may sound funny, but I like the feel of solid heavy steering.  The Coupe seemed lighter to me and I did not find the steering as stiff or sports like.  Again, I like stiff steering – just my preference, however.  As they say, MINI makes numerous models and you just have to find the one that is right for you.  MINImowse, my 07 Cabrio, and I  have bonded for life.  I still own my first ride, a 61 Bug and the last car that I owned before MINI, I drove for 20 years.  MINImowse and I will finish out my driving years together.  I chose a Cabrio so that when the day comes, I can very easily load my walker in (not for a very long time I hope).

After taking a few spins around the MINIcross track we hit the booths for some power shopping and then it was off to find the Hotel.  A little tricky to find but very nice and well worth the several times we drove around the block looking for the parking garage.  More than likely the bride posing for pictures next to the driveway was distracting.  It never

crossed our minds that a bride would be posing at the entrance to a parking garage.  The hotel decor seemed most appropriate for a MINI event as the carpet in the room and the coffee table in particular reminded us of the checkered flag! 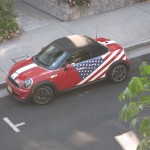 from Phoenix, Arizona.  We even saw some of the very same cars that we had been watching on the MTTS Facebook page.

About twenty minutes before seven, we headed out from the hotel to walk the .6 miles to the House of Blues in West Hollywood on the famous Sunset Blvd; uphill nearly all the way.  For two out of shape desk jockeys, this was quite the trek, but we did make it however.

keeps a metal box of mud from the Delta Mississippi underneath its stage.

Matt Nathanson headlined the multi-talented, super bash at the MINI TAKES THE STATES 2012 LA WRAP Party.   Known for hits like Wedding Dress, Faster, and the ever soulful, Come On Get Higher, Matt, with his folksy rock energy was a real kick! Recently known for his collaboration with acclaimed country 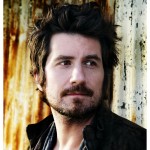 music group Sugarland, you may have seen him with Christen in their performance of “Run” at the 2011 CMA show.

To get the party started, newcomer Rozzi Crane opened for Matt. Rozzi is fresh off her mega contract signing with Maroon 5’s Adam Levine’s 222 Records.

Dropping beats and spinning us through the night was NYC native DJ Rell. Rell was home schooled in the house of funk, soul and Motown and soon scratched his way to the Scratch DJ Academy in LA. DJ Rell  worked his magic in-between sets and kept the crowd jumpin’ and bumpin’ all night long.

The evening started out with good southern eats, cool drinks and a MINI USA  surprise video with Jim McDowell and the gang kicking off the evening   Rozzi Crane then kicked it up 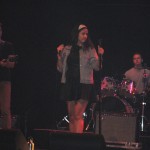 several more notches.  Rozzi is considered to be an explosive new talent with a soulful voice and commanding charisma.  Adam Levine has been quoted to say “The first time I heard Rozzi sing I knew I had to find a way to be a part of it. I didn’t have to think about it. She’s THAT incredible” -

She has opened for Earth, Wind & Fire, Frankie Valli and The Four Seasons, The Steve Miller Band, Neal Schon of Journey, Esperanza Spaulding, and Anthony Hamilton. She has also toured as a background vocalist with the Eagles’ Don Henley and Brazilian legend, Sergio Mendes. Most recently, Rozzi is featured on the Maroon 5 track, “Come Away” produced by T-Bone Burnett for the 2012 film “Hunger Games.”

A highlight of the Wrap Party was what initially appeared to be a very large MINI Cooper Hardtop radio control car placed prominently to the side of the stage.  The car was provided by Sports illustrated, one of the event sponsors, and was to commemorated the 10th anniversary of the new MINI making its debut in the United States.  The 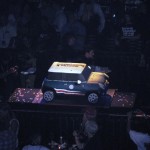 little car even had a miniature MTTS badge on the doors.  Upon getting closer to the car, it could be very clearly seen that rather than a radio control car, it was actually a cake!  The detail was absolutely amazing.  Near the end of the evening’s events the cake was cut and slices were handed out to the crowd.  It was most surprising how moist the cake was.  Often cakes that size, while cute, turn out to be rather dry and rather tasteless.  Leave it to MINI, not only was it very moist, it tasted great!  It consisted of several layers of white cake separated by a creamy light butter cream filling.  Bitzie and I shared a slice which had been a of part of the white roof and the windshield.  It was almost sad to see the little car go.

Happy but sad must have been the emotions for many of those attending the Wrap Party.  For over 100 of those at the event, this would be the last evening that they would be together.  Twelve days, 3,877

miles, 16 states and and 13 cities and all of those MINIs.  What other car company has such loyal owners, a special language, a secret wave, or for that matter, such an extended family of motorers?  It’s a simple answer – none.  The love affair with the Mini began in 1959 and in spite of numerous company owners and major design modifications, the Mini/MINI spirit lives on.

As the party wound down, Bitzie and I made our way back to the Hotel (all downhill thank goodness) and vowed that in 2014 we would be joining the MTTS once again, but this time for a lot more of the adventure; more miles and more cities.

Are you passionate about your MINI?  Just can't get enough of it and hate to leave it in the garage … END_OF_DOCUMENT_TOKEN_TO_BE_REPLACED