A small contingent of MidCal MINI members could not have asked for better weather as they headed to Humphrey’s Station for breakfast on Sunday, April 15.  While untold numbers of American’s were scrambling to complete their tax returns, a caravan of three MINIs and one MG departed from Starbucks at 8:40 am and headed for the hills.  With all of the rain of late, the foothills were still a bright emerald green with patches of bright pink redbud sprinkled about.  The blue lupins were just beginning to pop, but the most thrilling sight was the breathtaking deep blue sky.  Sky’s this blue were common place many years ago but now with air pollution, sky’s like these are few and far between.

After an enjoyable run on foothill twisties, the group stopped at Humphrey’s Station for a good old-fashioned country breakfast.

Humphrey’s Station was originally called Mechanicsville, gradually changing to Humphrey Station after Miles Humphreys’ store. Miles Humphreys came to California to join his brother John after the Civil War and saw an opportunity by opening his store at this crossroads. Although not an official stage stop, the Butterfield Stage dropped off passengers at Humphrey’s store to get “refreshed”. Passengers included for the most part working class men from the lumber industry.  Thus, Humphreys is the only location in California where “station” stands for a former stage stop rather than a train station.

With tummys full, the group headed out for more twisties.  Jon and Joanie were in the lead, Laura followed, Kikimowse and Don were in pursuit and Martin and Gwen keep everyone in formation.   Quite a few bike riders were also taking advantage of the first exceptional weather of spring.  While bikes are nice, MINIs are better! 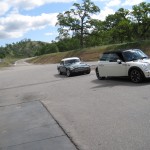 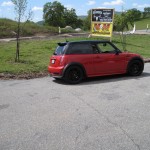 Are you passionate about your MINI?  Just can't get enough of it and hate to leave it in the garage … END_OF_DOCUMENT_TOKEN_TO_BE_REPLACED