You are here: Home / Club Corner / Stephane Peterhansel drives a MINI in the Dakar Rally

Stephane Peterhansel drives a MINI in the Dakar Rally

France’s Stephane Peterhansel clinched the 13th and penultimate stage of the Dakar Rally on Saturday leaving him on the brink of claiming a 10th title in the event.  Driving a Mini, Peterhansel 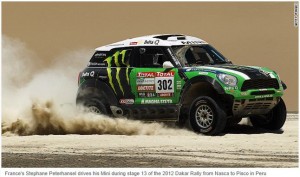 completed the 275 km timed stage from Nasca to Pisco in Peru ahead of South Africa’s Ginel De Villiers driving a Toyota. Peterhansel, who has won the car event three times and the motorcycle event six times, has a lead of close to 43 minutes over Spain’s Nani Roma.

“It was not a stage we were trying to win. First and foremost, we wanted to avoid falling into traps, especially after getting stuck in the sand yesterday,” Peterhansel said, AFP reported.  “There is still a 30-kilometer special to go and we could have a technical problem. I am still holding my breath this evening. I will breathe again once I am on the podium,” he added.

Compatriot Cyril Despres looks almost certain to win the motorcycle competition as he takes an 11-minute lead over nearest rival Marc Coma into Sunday’s final stage in Lima after the Spaniard labored with gearbox problems.  Portugal’s Helder Rodrigues, riding a Yamaha, won the penultimate stage of the motorcycle race finishing 47 seconds ahead of Despres.  “Today’s stage was psychologically very tough,” Despres said, AFP reported.  “I always wait until the last day to enjoy things. I have seen so many things happen at the Dakar, and even more today. I want to stay calm and enjoy things a bit more,” he added.

Also check out the Thread on Motoring Alliance.

Are you passionate about your MINI?  Just can't get enough of it and hate to leave it in the garage … END_OF_DOCUMENT_TOKEN_TO_BE_REPLACED