You are here: Home / Club Corner / MINI/Mini Thanks to Those Who Keep Us Motoring

MINI/Mini Thanks to Those Who Keep Us Motoring 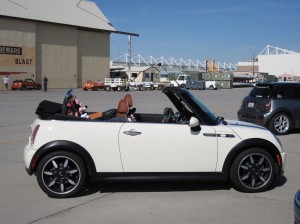 Just before New Year’s Eve, as I was about to head to LA for a visit with my extended family, MINImowse decided that she was not too happy about being left alone to celebrate the holiday.  While I could not understand her angst with me since she would be with her big brother Coopster, she still insisted upon letting me know how she felt by leaving drops of antifreeze on the garage floor.  It wasn’t like I was driving her to LA in the cold damp fog over the Grapevine as I had been planning to take the train from the very beginning.  I was leaving her snug in her garage complete with a night light no less.  Maybe she was mad because I wasn’t taking her?

A call was made to Custom MINI Shop (CMS) and Dr. Steve was able to diagnoise her issue over the phone – failure of the thermostate gasket.  MINI was sick and she was just trying to let me know, poor baby.  Once I assured her that an appointment had been made with her Dr. she seemed much better.  Infact she did not leave so much as a droplet on the floor while I was gone.  As soon as I returned it was off to Steve’s for the needed repairs.  A quick “look-see” also revealed a failed motor mount.  (Thank goodness I purchased the extended warranty in August!)  After a little time at the Custom MINI Shop Spa, MINImowse is a new girl.  I swear that she has a new “smooth” ride and more pep. 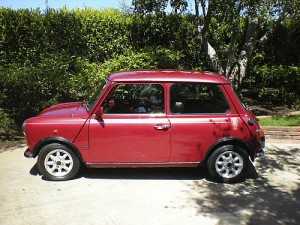 After picking up MINI at CMS it was off to Auto House of Clovis to visit Reggie.  Reggie is MINImowse’s adopted brother; a 1995 Rover Mini.  Reggie was adopted in June of last year and is having his transmission rebuilt by Darryl.  Reggie is a right hand drive Tartan Limited Edition Rover Mini with air conditioning and an automatic transmission.  Yes that’s right, an automatic transmission.  Darryl had Reggie’s engine and transmission sitting on the workbench ready to be reinstalled.  (My gawd it looked more like an oversized lawn mower engine!)  Reggie looked quite happy and content and has a great repair bay location; he has access to fresh air and plenty of sunshine. 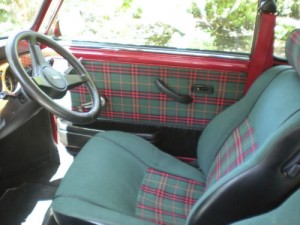 I found Reggie on eBay and after some research discovered that he was built in England and exported to Japan, thus the air conditioning and automatic transmission.  In England his brothers and sisters were badged as the Sidewalk  but when exported to Japan they were relabeled as the Tartan.  I bid on Reggie and initally no one met the Reserve.  A day or so later, I received a message through eBay that the seller was willing to accept my high bid.  I traveled to La Jolla to pick up the little car and it was love a first sight.  Upon driving to Santa Ana the transmission problem presented itself.  I left the little (un-name at that time) Mini in Santa Ana with family and went back a few weeks later to tow it home.  The more research that I did, the name came to me, Sir Reginald Stewart Rover – “Reggie”.  A tribute to his roots in England, recognition of his Tartan interior and of course cudos to his maker – Rover.  Thank goodness we found Darryl  and Auto House to rebuild his transmission as Reggie is a great little car and just needed a new lease on life.  Thank you too to my MidCal MINI family and their help in putting Reggie and Darryl together.

So if you wonder why people join MINI/Mini car clubs, it’s for the very reasons I have covered, making friends with folks with the same passion, care and respect for these great little c

ars; to enjoy each other’s company, to share events creating great memories and to be there for each other no matter what.  So why not start your 2012 off on the right foot (or is that tyre) and join a car club today?  And if you own a MINI/Mini, why not join us?

Are you passionate about your MINI?  Just can't get enough of it and hate to leave it in the garage … END_OF_DOCUMENT_TOKEN_TO_BE_REPLACED