Saturday October 8, 2011, the MidCal MINIs embarked on their annual run to the Whoa Nellie Deli via Yosemite and the Tioga Pass. The Fresno contingent met at Starbuck’s at Shaw just east of 41 at 7 am. Just past 7:30 am the group left to caravan to the meeting location in Oakhurst to rendezvous at about 8:00-8:15. The Oakhurst meeting location was the Raley’s Parking lot on the corner of HWY 41 & HWY 49. After a brief pit stop, the expanding caravan headed back onto 41 and on to and through Yosemite National Park. Upon entering the park and paying the $20 entry fee it was on to Tuolumne Meadows and over Tioga Pass and into the town of Lee Vining and the Famous “Whoa Nellie Deli”!

The Whoa Nellie Deli is located in a Mobil gas station on a hilltop just west of the intersection of U.S. Route 395 and California State Route 120, one mile south of the business district of the small town of Lee Vining, California. Geographically, this location is where the eastern edge of the Sierra Nevada meets the western edge of the Great Basin. Mount Dana and other High Sierra peaks are visible to the west. The eastern entrance of Yosemite National Park, located at Tioga Pass, is 12 miles to the west. Mono Lake, a uniquely salty and mineral saturated body of water, is visible from the restaurant to the northeast. The gas station also offers a gift shop, a small grocery store, and picnic facilities. Live musical performances are featured about 30 times each year from late spring to early autumn, usually on Thursday and Sunday evenings. The restaurant is closed in the winter. Trapeze lessons were once offered, but liability insurance considerations led to the cancellation of this service. 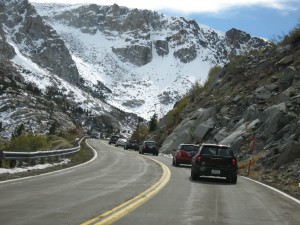 The restaurant’s location was described by the San Francisco Chronicle as “a misplaced Fellini set carved into the edge of the Mono Basin, dust devils skipping around in the distance like extras on the floor of Owens Valley.”

In an article about visiting Mono Lake, The New York Times commented, “When the desire that is the cause of all human suffering returned in the form of appetite, our editors were relieved to find the Whoa Nellie Deli, a shockingly gourmet oasis located at the local Tioga Gas Mart.”

Are you passionate about your MINI?  Just can't get enough of it and hate to leave it in the garage … END_OF_DOCUMENT_TOKEN_TO_BE_REPLACED